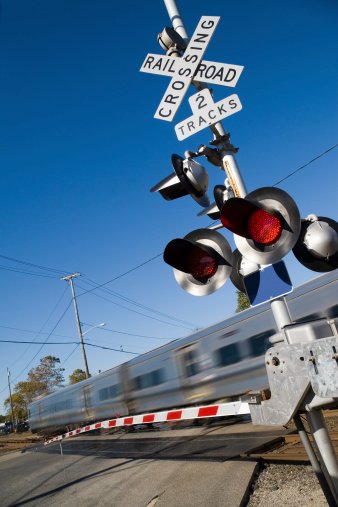 You’ve probably faced this situation before: You’re already late for your next appointment when you approach a pair of white gates lowering over a set of train tracks. The warning bells are ringing. The red lights are flashing. And now, you’re stuck. You look around to see if there’s a train coming. You don’t hear or see anything else.

Trying to beat the train in this situation—or at any point in time when railroad crossing gates are lowered—is a dangerous and deadly game to play.

There is a collision between a train and a person or a vehicle every 3 hours in the U.S. And according to the Federal Railroad Administration, there were more than 2,000 train-and-car collisions in 2017, which resulted in 272 deaths and 833 injuries. A motorist is almost 20 times more likely to die in a crash involving a train than in a collision involving another motor vehicle.

So why do drivers attempt to drive around lowered railroad crossing signs and gates?

“We really don’t know why drivers sometimes make unsafe choices at railroad crossings,” said Wende Corcoran, Interim President of Operation Lifesaver, a nonprofit organization that educates the public on railroads crossings and safety. “We know today’s drivers have a lot more distractions than they ever have before when they are behind the wheel.”

1. Don’t try to beat a train. You may see a train approaching and think it’s further away than it is and a train cannot stop quickly.

“Even if a locomotive engineer or a conductor sees [the car], a train moving at 55 mph can take a mile or more to stop once that emergency brake is on,” Corcoran said. To put that in perspective, a mile is about the length of 18 football fields. And this inability to stop immediately is why you see cars in train collisions pushed far down a track. 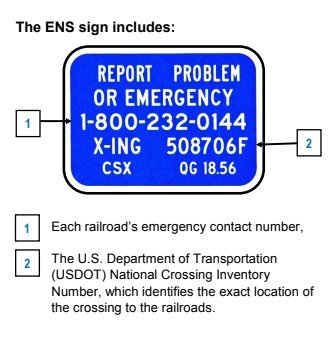 2. Don’t cross a lowered gate, even if it’s faulty. If there’s an emergency or problem at a railway crossing, call for help. Look for the Emergency Notification System (ENS) sign which should be right by the railroad crossing. (Image source: USDOT FRA.)

The ENS sign is blue and white and has the railroad’s emergency number, the name of the railroad owner, and the U.S. Department of Transportation (USDOT) National Crossing Inventory Number. This number indicates the exact location of the crossing.

When you call, you’ll talk to a railroad official who can address the problem or emergency, such as getting your car stuck on the track. In such a case, you’ll want to get yourself and your passengers out of the car and call the emergency number at a safe location.

3. Always approach with caution. Trains don’t always run on schedule, especially freight trains. They run at all times of the day and night. “When you see tracks, think train,” Corcoran said, emphasizing how important it is for drivers to approach railroad crossings with caution. Whether or not there’s a signal, stop at the railroad crossing to look both ways before proceeding (quickly) over the tracks without stopping.

Operation Lifesaver has more driving safety tips that will help you be more aware of your surroundings at a railroad crossing and prevent a collision with a train.