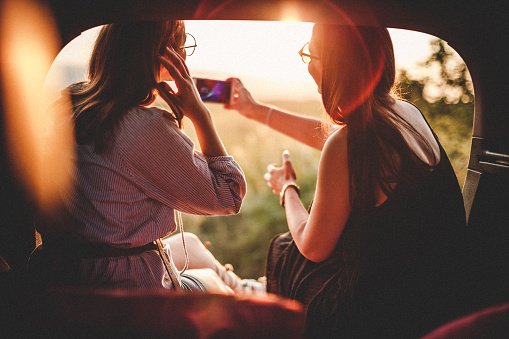 Again—you're stuck in traffic. You think, why not snap a cute selfie? What seems like a harmless action that can help make the time pass actually puts you and others at a huge risk of injury or death.

Handling a mobile device while in the driver’s seat is a major cause of accidents. It’s fine to want to share your life via pictures and video, but you’ve got to be smart about it. Videographer and video blogger, Jeff Grant, shares his secrets of making great pictures and videos, safely.

As a driver, your top priority is the road ahead. This awareness is negatively affected by in-car distractions, such as passengers and loud music, but also by the (illegal) use of mobile devices behind the wheel. But sadly though, you'll likely see other drivers around you using these devices. Ignore the urge to follow suit. Almost 90% of drivers use their phone at least once during their trips. As a result, distracted driving is a major cause of car accidents, killing 3,450 people in 2016. Because driving is a serious responsibility, you must keep both hands on the wheel and not on your smartphone.

Grant has filmed a lot for his YouTube channel, jeffgrantMEDIA, and for his corporate clients. The Scranton-based video pro drives a lot, but almost never uses his car as a backdrop for a video. Not only is filming in cars unsafe and against the law but also it makes for boring footage, he says. He advises beginners to get out of the car and find the action.

How to: Safely Take Selfies

"[Go outside], point the camera to your face and talk to it," Grant says. "Once you're uncomfortable, you're doing it right." Talking to a camera in public is a bit awkward, but it’s also a way to encounter new people and experiences.

Grant says his pet peeve is when he sees people holding their camera in portrait mode.

"Just turn your phone sideways, so framing is wide," he notes. Instagram now supports landscape orientation, so take advantage of that. Landscape view lets your images show context, which is usually more interesting than a portrait shot.

How to: Direct Yourself

Unless you are lucky to have some close friends, you’ll be taking pictures on your own. But that’s normal, Grant says. Most vloggers, including himself, don’t have access to a crew.

There are tricks to walking, talking and filming. Vloggers don't bump into telephone poles because they don’t look directly into the camera. Instead, the trick is to keep your eyes ahead of the camera, so you can see hazards ahead, Jeff explains. With practice, you will learn how to act natural, as if the camera isn’t there.

If something happens during your drive that you must share, pull over and park. Spend all the time you want with your camera in a parking lot.

How to: Tell a Good Story

Jeff advises beginners to learn how to "tell a story and get [the audience] engaged when there's action." What this means the goal is to show rather than tell.

“When I started my vlog, I did a challenge. I shot a video every day for 365 days.” It’s not something he recommends others do, but he learned from his failures. He explains that some days his story construction was “garbage.”

To stay organized, Jeff writes a rough script of bullet points for his product reviews. And he’d write down a shot list, so he could track the locations and content of his videos.

He advises that you can tell a story, but shoot parts of it in different locations. You can use your car as a backdrop, but remember to keep it in park.

One thing beginners might not know is how much planning it takes to make a good video or picture. Grant recommends keeping a journal to plot ideas. Sometimes his ideas didn’t work, but he learned to adapt.

There are retakes and editing involved to get the desired result. Also, a lot of vloggers use “B roll,” which is additional footage to insert into a video. In a video about B roll, Peter McKinnon says you can generate interest by filming the environment in different ways, including using a drone.

Try not to be too hard on yourself when you’re trying to get a good shot. Just stay safe and have fun.