Published: September 1, 2021
SAVE BIG on Auto Insurance!
Get a Quote

We all know it’s illegal–and unsafe–to drive under the influence of alcohol or drugs. As a matter of fact, impaired driving resulted in 1.2 million arrests and over 10,000 crash fatalities in the United States in 2013 alone. But when you look at the larger picture of traffic safety, you can see that a far greater proportion of traffic tickets and crashes every year are the result of common driving mistakes drivers make every day, often without even realizing how dangerous they really are.

On the road, most drivers just want to get where they’re going as comfortably and as efficiently as possible–after all, nothing can ruin your day quite like getting a speeding ticket or causing a crash. So how can you minimize these dangerous and costly disruptions? Well, beyond the obvious, like remembering to  stop at STOP signs  and  yield to emergency vehicles  , the best way to avoid costly driving errors is to pay more attention to how you’re driving. 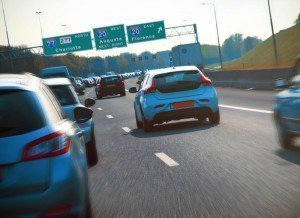 Some Data from the Lone Star State

To try and figure out what behaviors it’s most important to avoid, let’s take a look at some statistics from the state with the most fatal crashes in the United States last year–Texas. The following table shows the factors that contributed to the highest numbers of crashes in that state in 2014. 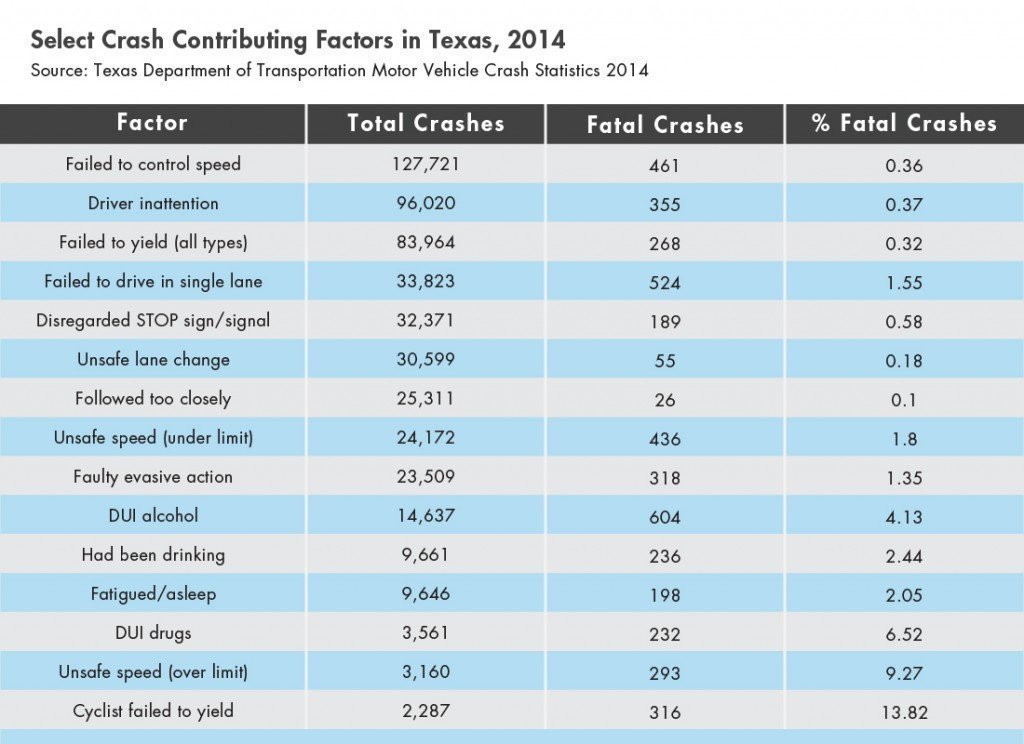 The Most Common Crash Contributing Factors

Most people already know that it’s a mistake to drive under the influence of alcohol or drugs, or to disregard a STOP sign. But the fact that other factors on this list contribute to so many collisions may be more surprising, particularly for drivers who haven’t taken one of our excellent courses in drivers education ! The factors listed below are ranked in order of total crashes. Do you know when you’re making these driving mistakes?

1. Failure to control speed
This all-encompassing error includes everything from driving too fast down a hill or through a curve to going too fast in the rain or fog–even if your speed happens to be below the speed limit! Driving at a speed that’s unsafe for current road, weather, and lighting conditions can make it impossible for you to stop safely or steer clear of a hazard. You may even completely lose control of your car!

2. Driver inattention
There are three things you absolutely need when you drive: your hands on the wheel, your eyes on the road, and your mind on the drive. An inattentive driver lacks some or all of these essentials. You may think it’s safe to divide your attention between the driving task and other activities, but you’re wrong. Emergencies can and do happen without warning, and when they do, you need to be ready to respond immediately, thoughtfully, and precisely. You can’t do that if you’re reading a text or holding a cheeseburger in one hand.

3. Failure to drive in a single lane
Drifting out of your lane is a surefire way to get honked at or, if you’re not lucky, cause a collision. Whether it’s due to inattention to their car’s position, confusion about road markings, or unskilled maneuvering while turning or changing lanes, many drivers accidentally and unexpectedly cross into an adjacent lane. Except when safely executing a lane change, always strive to stay entirely within your own lane.

4. Unsafe lane change
A safe lane change involves several critically important steps: activating the appropriate turn signal, checking your mirrors and blind spots for other vehicles, finding an acceptable gap in traffic, adjusting your speed, and smoothly steering into the lane. Always remember to look carefully for motorcycles, as they can easily be hidden in your blind spots and their riders are especially vulnerable in a collision.

6. Driving at an unsafe speed (below the speed limit)
It’s not an obvious fact, but even driving too slow can be dangerous and illegal. When you drive below the speed limit and slower than the traffic around you, you force other drivers to either slow down or pass you, and the more often cars pass each other, the more likely they are to collide. Don’t disrupt the flow of traffic–it just isn’t safe.

7. Faulty evasive action
This driving mistake highlights the importance of being attentive at all times. A large object falls off of a truck and into your path–what are you going to do? Are both your hands on the steering wheel? Did you see the hazard with enough time to evade properly? Do you know where there’s an open space that you can escape to? When the time comes to evade a hazard, you need to be prepared.

8. Driving while fatigued
It can be difficult to get enough sleep on a regular basis, but that’s no excuse for driving while fatigued. When you’re in control of a motor vehicle, just keeping your eyes open isn’t good enough. You need to be alert, attentive, able to think clearly, and able to exercise fine control over your muscles at all times. Fatigue deprives you of these skills.

9. Driving at an unsafe speed (above the speed limit)
Speed limits are designed to keep drivers safe, and even in perfect conditions, it’s dangerous to exceed them. Speeding disrupts traffic flow, creates more opportunities for collisions with vehicles being passed, and results in exponentially more severe impacts in the event of a crash. Moreover, when you speed, you’ll have less control over your vehicle and less time to react. Never drive over the speed limit.

10. Cyclist failure to yield to motor vehicle
On the road, you must always yield to avoid a collision, no matter what form of transportation you’re using. Remember that bicyclists have all the same rights and responsibilities as motor vehicle operators. Bicyclists are particularly vulnerable in collisions with motor vehicles, so whether you’re on a bike or in a car, make sure to follow the rules of right-of-way at all times.

Learning from Our Driving Mistakes

Did any of these crash contributing factors remind you of your own driving behavior? Remember that the best time to break a bad habit is  right now  ! You’ll save money on fines and tickets, avoid enraging other drivers, and most importantly, keep yourself and other road users safe. There are a lot of nuances to safe and responsible driving, but fortunately, it’s not that difficult! Just stay alert and focus on the drive. And if you do end up getting a ticket… there’s always online traffic school !