Surprise! 4 unexpected driving situations and how to handle them 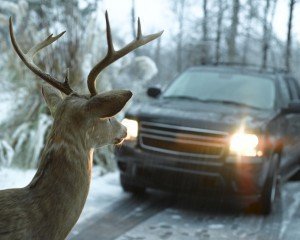 Even the safest drivers will encounter surprising situations on the road now and then. But newer drivers have encountered fewer surprises, which can make them scarier, not to mention more dangerous.

During any surprise on the road, the most important thing to do is remain calm so that you can rationally think through the safest method of dealing with the situation. In addition to that, certain steps can be taken to manage specific scenarios.

Here are four of the more common surprises you might encounter and the safest way to handle them.

1. Low visibility from blinding sun, oncoming headlights, or fog
Impaired visibility while driving can occur in many situations. Don’t panic and slam on the breaks if you round a corner into glaring sun. Instead, break moderately to slow down to a safer speed and point your eyes down and to the right to follow the white line painted on the side of the road. That’s why it’s there. In foggy situations, turn off your brights and use your regular headlines instead. Bright light will reflect off the fog, further reducing visibility.

2. Rain, sleet, hail, or snow
You will definitely encounter inclement weather while driving, the type depending on where you live. In all situations where water, ice, or snow is covering the road, traction is reduced making sliding, skidding, or spinning out more likely. Drive at slower speeds during poor weather, even if other drivers aren’t.

Rainy conditions are the slickest during the first ½ hour of showers, as the dirt and oil sitting on the asphalt mixes with the water, creating a slick surface. Sleet and hail are inherently icy, so slow down or avoid driving altogether. If driving in the snow, try to stay in the tire treads of the car ahead of you and avoid changing lanes where crunchy snow can build up and reduce traction.

If visibility is poor, turn down music and open a window, which allows you to hear dangers like honking or skidding vehicles, and also helps reduce condensation inside your windshield, which can occur when exterior conditions are significantly cooler than inside your vehicle.

If you do find yourself hydroplaning, take your foot off the gas and continue driving in a straight line (you won’t have the ability to steer anyway and turning the wheel could initiate an out-of-control spin). Do not apply the break, which will only encourage more sliding. Instead, slowly decelerate until you have regained traction.

4. Deer or other wildlife crossing the road
Hitting an animal while driving fast, especially a large one such as a deer, can be disastrous for both the animal and the driver. The first line of defense is to turn on your brights so that you can widen your view of the road. This will sometimes reflect off an animal’s eyes, making them more visible. Watch for deer or wildlife crossing signs, which are placed in areas where animals are known to congregate. Deer tend to travel in small herds, so if you see one near the road, assume others are nearby.

If you encounter an animal in the road, ideally, you should try to slow down and then veer around it. But if you only have time to pick one, slow down. Veering at too high a speed could result in hitting other objects like trees or parked cars, or flipping your vehicle. And hitting a deer head on at a high speed might send it crashing through your windshield. Overall, it’s smarter to reduce your speeds at night, particularly in rural areas.

Stay alert, stay calm, stay safe
Keeping general safety in mind is always smart, such as not speeding, wearing your seat belt, and minimizing distractions (no texting!). But when unexpected situations present themselves, keep a cool head and stay calm. You’ll stay safer and be better prepared for future surprises on the road.