Even the smallest driving mistake can trigger a road rage reaction in the drivers directly impacted by your error. The lack of face to face interaction on the road virtually eliminates the allowance that would normally be given after someone makes a simple mistake. The resulting angry, irrational reaction becomes a dangerous problem when aggressive drivers act on their impulses. With aggressive driving accounting for 56% of all traffic fatalities , it is definitely in your best interest to act in a calm, rational manner to safely remove yourself from any road rage situation that may occur.

Here’s how to proceed if you ever become a target of road rage.

1. Signal, Move to the Right, and Decrease Your Speed

Two wrongs never make a right, but that is exactly how aggressive drivers approach errors in traffic situations. If you cut someone off on accident, for example, an aggressive driver might respond in kind in addition to honking excessively, swearing and slamming on his or her brakes.

When this happens, you can try to right your error by signaling, moving to the right and decreasing your speed. By moving out of the way, you are communicating that you did not mean to make an error and wish to remove yourself from the situation altogether. No matter what the other driver does or says, you should never stop and engage with that individual, as that action could result in injuries to you, your passengers and other people on the road.

2. Apologetically Wave and Nod at the Aggressive Driver

Once you get to the right, the aggressive driver may attempt to pass and cut you off. Give an apologetic wave and nod to attempt to temper their anger and further communicate your regret. Much like it is used to say thank you , a quick wave is a courtesy that goes a long way in apologizing to the other driver for your mistake. Avoid a thumbs-up or any other gesture that could be misunderstood as a rude, spiteful or aggressive action. 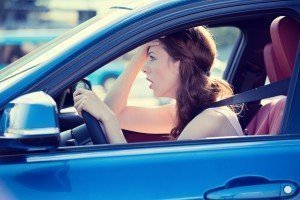 Eye contact can be perceived as an aggressive reaction on your part, so always keep your eyes firmly on the road ahead. Situate both hands on the wheel in a ten and two configuration to prepare for the need for sudden maneuvers. Remain equally ready to brake gently, yet swiftly, in case of rapid braking maneuvers from the other driver.

Reduce your speed slightly to help add extra distance between your vehicle and the angry driver’s. The more room you put between yourself and the road rage prone driver, the better. You really cannot have too much room while driving defensively anyway, as the extra space gives you ample time to react and adjust your speed, accordingly.

As explained by Steve Staveley , Lead Instructor at Fast Lane Racing School, “Use the 1 second per 10 MPH, or a car length per 10 MPH” rule to keep your car at a safe distance from other vehicles. “Your goal is to get to your location safely. Give the other guys space, so you have space,” states Staveley.

4. Do What You Can to Temper Your Own Reactions

Your own reactions to road rage can play a role in either escalating or diffusing the situation.

“Be patient and don’t engage in the same activity as the aggressive driver,” said Lieutenant DeBock of the Duvall Police Department in Duvall, WA. “The safety of you and your passengers is most important. Nothing is worth your lives.”

To make safety your top priority, you must actively temper your own reactions as the road rage situation occurs to keep from doing anything to escalate the aggressive response. You can listen to calming music, countdown from 100 or practice deep breathing to settle your emotions and respond in a calm, rational manner.

Have You Witnessed a Road Rage Incident?

If you are ever a victim of road rage, or witness an incident between other drivers, use your hands-free, voice-activated phone to call 911 and report the incident. Provide as much information as you can to the dispatcher to receive assistance from a police officer.

If you are already safe, you should still report the incident to help prevent your fellow drivers from becoming a victim of road rage as well. In addition, the aggressive driver may receive much-needed defensive driver training or other interventions as a result of your report.