My First Road Trip…In a Porsche

Imagine getting this text from your next-door neighbor: “I left my Porsche in the garage when we moved out yesterday. Would you be interested in driving it down here for us?”

Interested in driving a Porsche? Of course I was. But the journey from our street in Oakland to my neighbor’s new house in San Diego would take 9 hours with traffic. So while I was thrilled by the idea of driving a silver Carrera 4S down I-5, I was also nervous about delivering it safely from Point A to Point B…with 500 miles in between.

However, I channeled my nervous energy into focus. I saw this road trip as a culmination of everything I knew about safe driving—as if I was taking my driver’s license test part-two. Here’s how I passed:

Know your route. I didn’t want to rely on my phone’s directions the entire time, especially on the freeway. So while I did have map guidance turned on for the more complicated parts, I also made sure to familiarize myself with the general directions. All it took was reading through the Google instructions the night before and orienting myself with the map.

Plan your stops. Normally when I drive around town, I don’t start to worry about the gas tank until the last 5 miles or so. But now that I was covering so much ground, those signs saying “50 miles until next gas station” became relevant. So I kept an eye on the signs and on the gas tank. While this should sound obvious, the last thing you want is to forget about the gas tank until it starts warning that it has 25 miles to go…when it’s 30 miles to the next exit. Meanwhile, to stay fueled up myself I opted for the gas station grab-and-go coffee drinks, sparing myself the line at Starbucks. 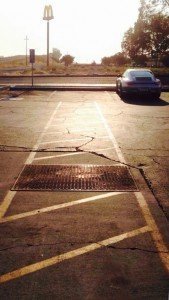 Go with the flow (of traffic). To get to San Diego, I had to drive through Los Angeles. Congestion was inevitable. Once I hit the stop-and-go city traffic, this method really came in handy: when I was going fast but could see brake lights way out ahead, I would tap my brakes a little as I eased off the gas. Even before I needed to really decelerate, I was signaling to the drivers behind me that traffic was slowing down ahead. For the most part, they noticed and would ease off too, giving me more space to let off the gas. I did take note of a few distracted drivers following too closely behind me now and again. When it was apparent that someone was overly-invested in a phone conversation, I changed lanes.

…But stay on your toes. Which lane is best for comfortably going the speed limit, where I won’t get stuck behind slow traffic, but where I also won’t be tailgated by faster cars? How much following distance can I leave? I’m used to driving the same routes at home, where I already know the answer to these questions. Driving a long distance though means encountering different segments of highway, each with its own set of unspoken rules. It wasn’t hard for me to get a sense of them, as long as I continued to pay attention to other drivers.

Have a great playlist. Duh.

So while my future road trips probably won’t take place in a car that costs more than my college-tuition, I am glad that I had these high-stakes to keep me focused on my first one. 9-hour drives definitely demand both attention and patience, not just for the first hour. Nonetheless, keeping a few basics in mind makes for a smooth ride.