Driving Safely While Eating? Not Possible.

It turns out that driving safely isn't endangered by just the prevalence of mobile device use behind the wheel; eating while driving is one of the most common forms of distracted driving, and can be just as dangerous.

Could Eating Be as Bad as Texting behind the Wheel?

One moment of distraction is all it takes to cause a car accident. No one wants to hear that, but it's true. Distracted driving doesn't need to be caused by cell phones or texting; it also includes reaching for something or just talking to passengers. Unfortunately, it doesn't take much at all.

Many of us have personal experience eating or drinking something while balancing the steering wheel, so what's the big deal? Driving itself has a certain level of risk involved, of course, but doing something that distracts you can add to the challenges you face while trying to pay attention to the road.

But is the convenience really worth it? Maxine Reiman of Value Penguin doesn't think so.

"Drivers may not realize how distracted they really are when eating food behind the wheel," said Reiman, who's Head of Insurance at Value Penguin, a website with free information about personal finance. "One study found that, while people were similarly impaired in their ability to drive by both eating and texting, people felt that texting was harder."

In other words, eating could be just as bad as texting! What's a driver to do? If you can, pull over and let someone else drive or park your car until you're finished.

Have to Eat? Here's How to Keep Driving Safely 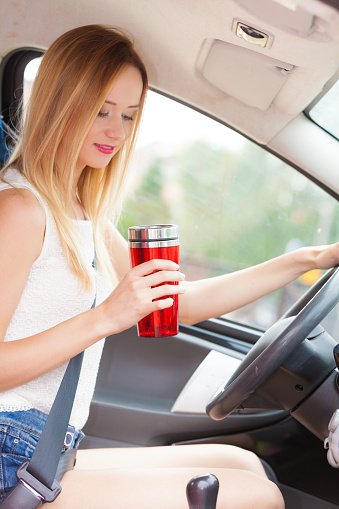 While Reiman absolutely doesn't recommend eating while driving, there are a few things drivers can do to reduce their risk of an accident if they do decide to nosh anyway. Here are Reiman's tips.

1. Hands on the Wheel

"To start, I'd call out that while eating and driving isn't specifically illegal, it can be considered a moving violation under local distracted driving or reckless driving laws. These laws are often worded broadly, giving the law enforcement officer more discretion as to whether what you're doing is distracting you from the safe operation of your vehicle," Reiman noted.

If it takes both of your hands off the wheel at any point, then you shouldn't be doing it. Plain and simple. Pull over if you have to, and finish your meal or snack with safety in mind. And if it needs a fork, Reiman says you're definitely in dangerous territory if you don't pull over, because you're probably trying to hold your food and a fork simultaneously.

Just avoid dipping sauces altogether if it's in the car. Not only is sauce a messy prospect, but it's even more distracting to drivers.

"Any foods involving a dipping sauce will likely require both hands at some point. And foods that either leave a residue on your hands or that may drip onto your clothing, such as a jelly donut, can be greater distractions as well, since you'll be inclined to address the mess instead of focusing on the road."

Yikes. Better off saying "no thanks" to that handful of extra ketchup packets.

3. Use the Napkin Test

In a similar vein, you can use this rule to help: if it needs a napkin, you shouldn't be driving. Drivers tend to become preoccupied with trying to clean their hands.

So, perhaps you shouldn't even have napkins within reach of the driver as a reminder that the road's your priority. Plan your meal accordingly.

If you're hungry but also have to drive, plan-in a shortstop to eat. Reiman says it's important to find a safe place to park--and if you can plan this in advance, do it. A little planning can save lives.

"In 2017, Florida alone had more than 50,000 crashes involving distracted drivers which accounted for 220 deaths," Reiman adds. "Eating during your commute may seem like a convenient option, but the downsides are large enough that we would recommend that you don't take the risk."