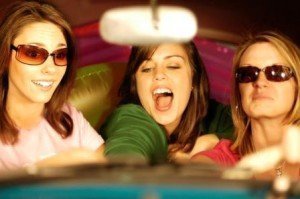 Your teen is a driver! Congratulations! And don’t worry: if you are a good driver, most likely your teenage son or daughter will be too! According to a recent study by the  University of Michigan Transportation Research Institute , teens’ driving habits trace back to their parents’ driving behavior. According to the survey, young drivers consciously or unconsciously copy up to 90% of their parents’ habits. Just be aware that, besides imitating your perfect driving skills and maneuvers, you kids will replicate your bad habits as well.

If teens’ parents eat and drink while driving, the teens are three times more likely to do the same. If they catch a parent looking for something while driving, teens are two times more likely to repeat the activity. The situation becomes even worse when it comes to using phones and gadgets behind-the-wheel: over half of the teens said they use a phone while driving, and 6 out of 10 parents admitted to also using their phone and steering at the same time, despite the fact that this type of activity has an extremely dangerous effect on driving performance.

But if you’re a perfect driver and always giving good driving tips to your growing child, should you still be concerned about your teen’s driving habits? Probably, since teens have a whole lot of other influences on their vibrant and ever-changing lives. Some of the things you can do, besides being a good example for them, are:

— Have the talk. Agree on the fact that driving is a serious responsibility. Discuss what it means to be a safe driver with your teen and set ground rules for when they’re behind the wheel. If your teen is on the road, they should stay focused only on driving. Explain your point of view and discuss the consequences of distracted driving and breaking the traffic rules. You can even create a Parent-Teen Contract that outlines your teen’s responsibilities when driving.

— Know the laws in your state. Many states have  Graduated Driver Licensing (GDL) laws that include cell phone and texting bans for young drivers. Remind your teen driver that there could be serious consequences for violating these laws–including a delayed or suspended license.

— Don’t wait until your child reaches driving age to start being a good example for him or her. Even making small exceptions for distracted driving can not only jeopardize your safety at the moment, but also have a great impact on your teens’ driving habits and their safety in the future.