Parents, Give Your Teen the Gift of Knowledge This National Teen Driver Safety Week 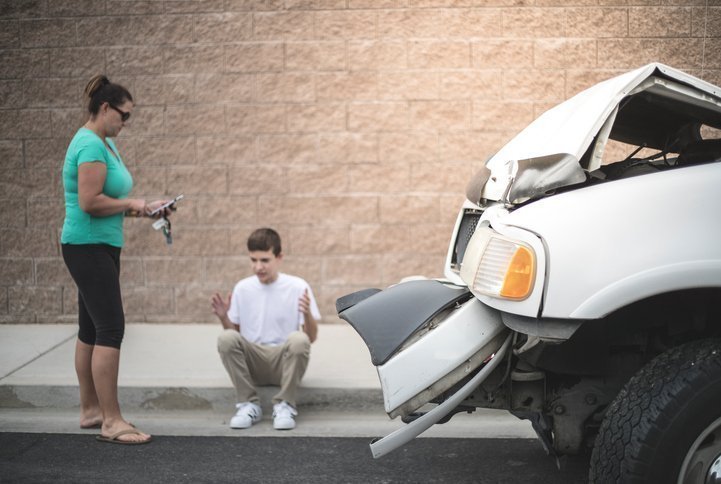 Parents, what’s on your to-do list for this week? We have a recommendation for your first task: Talk to your teen about their driving behavior on the road.

Why? Drivers under the age of 20 have the highest proportion of distraction-related fatal crashes . And because of this dangerous trend, the U.S. Department of Transportation’s National Highway Traffic Safety Administration (NHTSA) is urging parents and teens to take essential steps to prevent crashes this week, dubbed National Teen Driver Safety Week .

Staying involved
But first, it’s time to assess your own driving behavior: Are you a good example of safe driving? Also, do you talk with your teen often enough about the risks they face on the road?

Once they’re driving independently, teen drivers are a high-risk group. In 2015, almost 2,000 teen drivers were involved in fatal motor vehicle crashes and 99,000 were injured on the roads. The good news: Teen driver crashes are preventable and there’s plenty you can do to help protect your teen.

“Parents are one of the top influences on teen driver safety. Parents need to start the conversation, set the standard and spell out the rules for their teen when they start getting behind the wheel,” the NHTSA stated. “Self-reported surveys show that teens whose parents impose driving restrictions and set good examples typically engage in less risky driving and are involved in fewer crashes.”

The big six
The NHTSA has identified six specific driving behaviors teenagers engage in that can be extremely risky:

Make sure your teen is aware of each of these dangerous behaviors and help them understand why — and how — they can increase his or her likelihood of becoming involved in a crash. Tell them how important it is to avoid putting themselves, and others, at risk.

Next, share the facts with your teen. For example, did you know that in 2015, almost one in five teen drivers involved in fatal crashes had been drinking? And that, according to research by the AAA Foundation for Traffic Safety, distraction is a factor in nearly 6 out of 10 moderate-to-severe teen crashes? As for carrying passengers, NHTSA research shows that teen drivers are 2.5 times more likely to engage in one or more potentially risky behaviors when driving with one teenage peer, compared to driving alone. The risk triples when driving with multiple passengers.

Be sure to impose mobile device restrictions on your teen while they are operating a vehicle. The use of cell phones and other electronic devices is a particularly big risk factor for teen drivers. We’ve highlighted the reasons why before , including phone addiction, an “always-on” lifestyle and “Fear Of Missing Out” (FOMO). Yet, teens aren’t the only ones addicted to their phones. According to Common Sense Media , a nonprofit dedicated to helping children thrive in a world of media and technology, parents use media for entertainment just as much as their kids, yet have concerns about their children’s media use.

“American teens use an average of nine hours of media daily, not including for school or homework. Meanwhile, a majority of parents (56%) admit they’ve checked their phones while driving, and their teens are watching–and, in many cases, copying that behavior,” said Common Sense Media founder and CEO, Jim Steyer . “Any parent who has sent their teen out on the road hopes that he or she is not using their phone while driving, but what example have you set as the driver your kids have watched the most? Parents should make it clear that mixing keys and phones is absolutely unacceptable, set clear rules (and consider downloading apps that can help enforce them), and set an example by not using the phone while driving.”

Rules and consequences
All 50 states and the District of Columbia have a three-stage Graduated Driver Licensing (GDL) system that limits high-risk driving situations for new drivers. The NHTSA says GDL can reduce your teen’s crash risk by 50%. Familiarizing yourself with your state’s GDL laws will enable you to enforce the restrictions and establish important ground rules to keep your teen safe.

As a family, you can take this a step further and all agree to follow a set of safe driving rules. Mike Sample, Lead Driving Expert and Technical Consultant at Liberty Mutual , believes a teen driving contract is the ideal conversation starter.

“Parents are key influencers when it comes to teens’ behaviors behind the wheel — both their current habits and ones they may pick up as they gain experience and confidence,” he said. “In fact, four out of five parents admit to phone use while driving. It’s key not to critique just your teen’s driving behaviors, but use observations about both your and your teen’s habits behind the wheel as learning experiences. Families can use the Liberty Mutual and SADD teen driving contract as a conversation starter and discussion guide. The contract outlines important safety issues and can offer an easy way for all members of the family to agree on predetermined rules.”

Parents, here are our top five tips to help encourage your teen to drive safe this National Teen Driver Safety Week and every week:

More resources for parents of teen drivers can be found on nhtsa.gov .