I am a Pedestrian. And So Are You!

By Valerie Demicheva | Published: August 31, 2018
SAVE BIG on Auto Insurance!
Get a Quote

As a girl who despises the gym, I force myself to be a pedestrian more often than a driver (and by the way, I’m a fabulous safe driver ). But lately it’s become dangerous to simply cross the street in San Francisco.

I’m lucky to live in a breathtaking city . Every seven blocks is a new neighborhood with its own trademark attractions and microclimate: NOPA , SOMA , FIDI –take your pick. But it’s hard to enjoy sweeping views of the Golden Gate Bridge from Broadway Street when I have to focus so hard on making sure that the many seemingly distracted drivers  actually see me crossing (which is just one of the many excellent reasons I tend to wear a lot of neon).

As a driver in San Francisco, I’ve dealt with the frustration of watching out for jaywalkers running amok in areas like the Tenderloin and even the Sunset. Yes, I’ve been caught off guard by jaywalkers and had to slam on my brakes a time or two while merrily singing along to the radio. I’ll admit I’m not always ready to halt at a moment’s notice. But I’m getting better about it, and I’m always–always–on the lookout when it comes to pedestrian crossings. Pedestrians are the most vulnerable roadway users, and it’s not just the law that tells us to make their safety our highest concern. 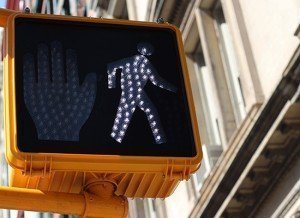 It’s tragic that San Francisco has more than 700 pedestrian injuries each year, according to an analysis by The Center for Investigative Reporting.

These unfortunate deaths and injuries are preventable in several ways. First, drivers can become better driver by taking a drivers education course online . Even if you’re an adult who’s been driving for years, an online drivers education course for adults can teach a lot. Plus, in many states, taking the courses could also save you money if you send the proof of completion to your insurance company!

Next, you can also make yourself an aware pedestrian by staying within the crosswalks and making yourself more visible at night (reflective neon, anyone?).

And last, empower yourself, your family and neighbors by actually asking your local officials to make changes in crosswalk design and laws. Check out this awesome resource guide –the vulnerable folks in your life (pets, kids, grandparents–even you, sometimes) will thank you later. After all, we’re all pedestrians, and we all have something at stake.