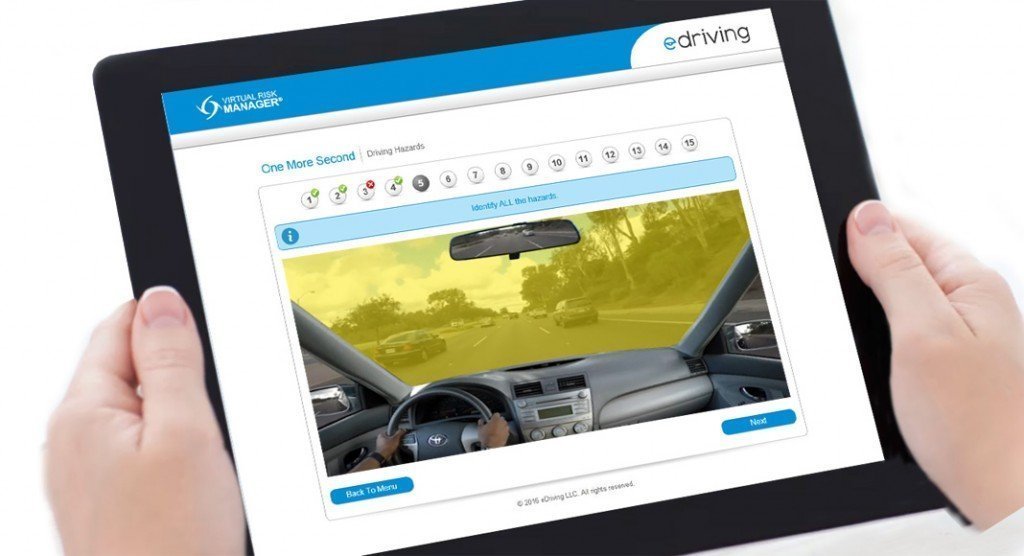 1.2 million people die every year in road crashes. I know that’s terrifying, but scary numbers like that tend to fly right over my head.

So, when I was asked to try out eDriving’s new online defensive driving course, One More Second , and it started out with facts about car crashes, injuries and related costs, I thought, “Great, another boring video about how driving is dangerous.”

As if reading my mind, the narrator responded, “We are pretty sure these facts are nothing new to you and will probably NOT persuade you to think about your own driving style, never mind change it!”

I was instructed to pause and think about what would persuade me to think about my driving style. The narrator went on to say that most people don’t change their driving habits unless something bad happens—either to them or to a loved one.

Have you heard of Murphy’s law? It’s the idea that whatever can go wrong will go wrong. I feel like I have spent my driving career knowing that close calls are bound to happen and hoping that when they do my reaction time will be fast enough to avoid a major collision.

“By learning defensive driving skills, I can significantly reduce my chance of injury on the road.”

BUT, during this course, I discovered there’s a better way to stay safe on the road. There’s a method for anticipating what can go wrong and preventing it from happening: defensive driving. By learning defensive driving skills, I can significantly reduce my chance of injury on the road.

Defensive driving is a set of principles which can be combined with a planned driving system, the correct attitude and skill to guide any driver’s actions. The benefit? Defensive drivers are in control and continually aware of situations around them.

This sounds pretty simple, and the One More Second course emphasized that once you commit to changing your mindset and developing new habits, it becomes a lot easier to avoid trouble on the road.

Despite the simplicity of the concept, I was shocked by how much I didn’t know about driving defensively. The course was sprinkled with quiz questions, many of which I answered wrong on my first attempt. The surprise of seeing my incorrect answers made me pause and finally admit, “Yeah, maybe I could be a better driver.”

By the time I reached some of the other interactive activities in the course, I was hooked. When observing a driving scene from a bird’s eye view, it’s easy to anticipate dangers about to happen. You’re removed from the situation, you can see everyone involved, and you are paying close attention. So, when an animated cyclist circumvents a parked car at the last second, it’s no surprise that a closely trailing vehicle must swerve to avoid hitting the cyclist.

“Immediately practicing new techniques made me feel like I was absorbing the material as well as if I was being taught by an instructor in a moving car.”

It turns out that anticipating danger is more difficult when you’re right in the thick of it. The course’s challenging in-car simulations put me into the driver’s seat, from where I was tasked with identifying impending threats. I found these challenges difficult at first, but as the course went on I could feel my observation skills improving. Immediately practicing new techniques made me feel like I was absorbing the material as well as if I was being taught by an instructor in a moving car.

Another thing I liked about One More Second was that it didn’t feel like I had to remember every single tip to get a lot out of the course. It had clear and memorable takeaways about things like attitude shift and hazard identification. I’m confident that takeaways such as these, combined with some of the specific techniques in the course, will make me feel a lot safer the next time I get behind the wheel.

In just two hours One More Second teaches advanced defensive driving skills to make sure all drivers are ready for whatever the road brings! It is perfect for parents preparing to teach their teens to drive and perfect for teens who want to continue to gain skill and confidence behind the wheel.