Justin Bieber Could Use Some Drivers Ed

It’s become clear that Justin Bieber could benefit from a few hours of good ol’ fashioned California drivers ed before someone gets hurt. Oh wait…someone already got hurt.

On Monday night, Bieber, a hat, and his friend Lil Twist were swarmed by paparazzi and camera flashes as they left the Laugh Factory and got into Bieber’s white Ferrari. 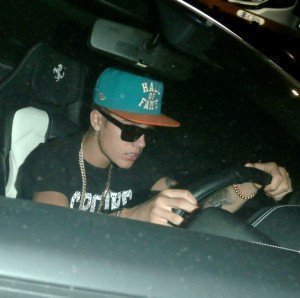 Bieber pulled his hat over his eyes and slowly pulled away from the curb, allegedly trapping a paparazzo between his Ferrari and a Mercedes that was near the curb. Bieber drove away as the man fell to the ground, gripping his injured leg; he was taken to the hospital later that night.

According to the Huffington Post , the Los Angeles Police Department determined that Bieber was unaware he’d injured the paparrazo, and the hit-and-run allegations were cleared.

As cute as Bieber is, and dulcet though his tones may be, there’s something a little worrying about the pattern of recent stories surfacing about the star. His behavior is veering into Lindsey Lohan territory, and as Beliebers and California drivers, we’re starting to worry.

We definitely wouldn’t want to cramp his style, after all, his collection of hot whips has become part of his identity. So after surveying some hardcore Justin fans and a few drivers ed instructors, we came up with some suggestions that should satisfy the star and  the safety of Hollywood:

1. Coordinate with the Kardashians when you go out. That way half the paparazzi will follow baby Kimye, leaving you to operate your vehicle with fewer photographers obstructing your path.

2. Get some designated drivers. Let your many responsible,  older fans  drive you around to your appointments. They’ll provide the added bonus of reminding you of your manners and curfew.

3. Take a defensive driving course. We don’t blame you for being blinded by paparazzi, but that doesn’t excuse careless behavior behind the wheel. You might not have been born yet, but Princess Diana died in a crash because of a drunk chauffeur and a  paparazzi chase . We don’t want anything like that to happen to you, Justin. So please limit your new bad boy behavior to sunglasses at night and Chanel balaclavas .

And if you see Justin Bieber out there? Give him–and his car!–plenty of room. You don’t want to be the next person he runs into. 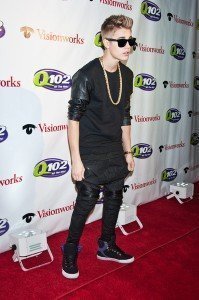