Driving conditions in rural areas differ from those in city areas, primarily because there is less traffic. Yet rural areas can be twice as dangerous as their city counterparts—nearly twice as many highway deaths occur in rural areas. On open highways, be aware of the following hazards and driving challenges: 1. Unmarked field and farm driveways and entrances: these unmarked roads are often hidden because of crops, bushes, or trees. Always keep a lookout for potential hazards like hidden driveways or farm field entrances, as they can become "instant intersections". Always reduce your speed when driving through rural areas. Even at slower speeds, you should remain alert—the danger of a vehicle pulling from the side of the highway into traffic is very high in rural areas. 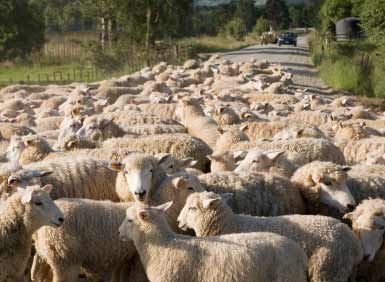 2. Livestock crossing areas and farm vehicles: when driving in rural areas you must be wary of things such as tractors, farm trucks, and farm animals in the roadway. Always be alert and keep a lookout for any animals crossing the highway. If you encounter a herd of animals on a highway, stop and let the animals cross. Once they are gone, proceed with caution.

3. Rough road conditions: rural highways are rough roads designed for slower speeds. These roads are paved with various materials like concrete, asphalt, crushed stone, etc. Fresh tar is often spread over gravel when patching the rural roadways. Proceed with care to avoid throwing tar on your vehicle and stay back from any traffic in front of you to avoid flying gravel. Most open highways in rural areas are maintained less frequently and lack the advanced features of modern freeways. In some places, these highways may not be paved. Dirt roads are common in many rural areas. 5. Soft and unmarked shoulders: be aware of unmarked and soft shoulders on open highways.