The following bad drivers on film are our “don’t try this at home” to anyone hoping to get or keep a license (not to mention stay alive). Inadequate driving can be deadly in real life. Of course these stars had stunt doubles and special effects helping to make sure they only looked like they were in real danger.  Again, don’t try this at home!

Thelma and Louise were unique. They were two women causing a ruckus in their 1966 blue Thunderbird convertible . Here they fly off a cliff after a long police chase leaves them with nowhere else to go. The film ends there. There isn’t a sequel. Presumably, they die. Please don’t try this at home or in your local canyon. 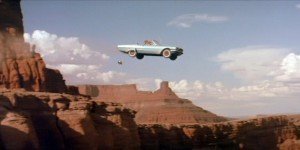 On Ferris Bueller’s day off he sings “twist and shout” as the star of a parade in downtown Chicago, successfully tricks his school and parents into believing he’s sick, then manages to crash his dad’s 1961 Ferrari 250 GT California Spyder convertible without even getting behind the wheel. It glides right through the garage window. But that still doesn’t stop our hero from getting away with a day of mischief in downtown Chicago. This only happens in the movies!

Cher Horowitz, from Clueless, has a really hard time driving in Los Angeles. She passes stop signs, hits curbs, and ultimately doesn’t pass her driver’s exam when she hits a parked car. Her preparation for the driver’s test was cruising around with her friend, Dion, who also only had a permit (by the way, that’s illegal and can put you at risk of losing your permit and potentially fined). If only Cher had access to driversed.com’s simple classes , she would have passed the exam with flying colors. But this was 1995, and even the cool kids didn’t have the Internet back then, just fuzzy back packs and apparently a lot of knee high socks.