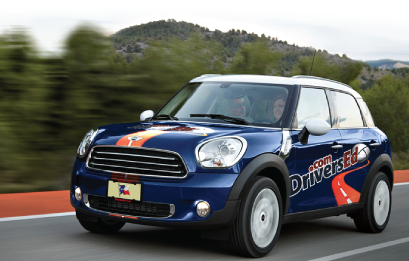 To improve road safety, there are several things we can do. First, we can pass new laws or strengthen the laws that already exist in order to discourage dangerous driving behaviors. Second, we can improve how these laws are enforced by hiring more peace officers or making certain offenses a higher priority. Third, we can promote the adoption of new technologies that make both roads and vehicles safer. And finally, we can educate the public to make sure that drivers understand the risks of certain behaviors and recognize what they need to do to keep themselves and others safe.

At DriversEd.com, our focus is on this fourth strategy, making the roads safer by helping drivers be as informed and prepared as possible when they get behind the wheel. But it’s not just driving schools that join us in this mission. Governments, nonprofit organizations, and creative professionals play their part by creating powerful public service announcements (PSAs) . These short videos memorably reinforce how dangerous it is to do things like speed, drive drunk, text on the road, and fail to buckle up–often in only 30 to 60 seconds!

What makes safe driving PSAs so effective is that they confront drivers with the risks of unsafe driving in unexpected ways. While drivers education classes take a comprehensive and systematic approach to teaching safe driving skills, PSAs act like a lightning bolt to the brain, searing their focused messages onto the minds of the people who view them. And while there’s no substitute for high-quality drivers ed , PSAs also play a valuable role in giving drivers a visceral understanding of why certain actions are so unsafe when they’re behind the wheel.

With these facts in mind, we’ve put together this list of some of our favorite safe driving PSAs. These spots will make you laugh, they’ll make you think and, with any luck, they’ll even make you drive a little more carefully!

It’s no surprise that  The Walking Dead , one of the most popular shows on television, has inspired a number of parodies. But would you believe that one of those spoofs is about seat belt safety? In fact, the Illinois Department of Transportation has so far produced three episodes of the zombie-themed series, The Driving Dead , and these spots are some of the moodiest, most stylish PSAs ever created.

Starring Michael Rooker (who plays the character Merle Dixon on The Walking Dead ), the series features a ragtag band of survivors struggling to get by as they contend with both zombies and a group of cruel and hostile rivals. While the bulk of each episode is focused on revealing the survivors’ world and telling their story, they all end with a twist that emphasizes safe driving as a survival strategy. The series reminds us that, even if civilization is in ruins, there are certain things we should do to protect ourselves whenever we’re on the road.

Distinguished by a cute style and an incredibly infectious tune, this animation is one of the few PSAs to spawn its own meme (though it isn’t the first ). For a couple minutes, we see a series of shapeless cartoon people dying in funny, gruesome, and increasingly stupid ways, such as eating “medicine that’s out of date” and taking “your helmet off in outer space.” Finally, the video culminates in the dumbest ways to die of all: acting unsafely around trains by doing things like “driving around the boom gates at a crossing.” (In Australia, where this series was made, crossing gates are called boom gates.)

We at DriversEd.com enthusiastically endorse the message of this campaign. In fact, we think it should be extended to all unsafe driving behaviors: speeding, driving drunk, and texting while driving are foolish, and to die because of them is just dumb . Whether you’re near a railroad crossing or anywhere else on the road, remember that to be a safe driver, you have to be a smart driver.

Some of the most effective safe driving PSAs in recent years have been produced by the Victoria Transportation Accident Commission (TAC) , another road safety organization based in Australia. (“ Everybody Hurts ,” for example, is such an powerful, shocking, and heart-breaking depiction of the tragedy of drunk driving that it wouldn’t be right to ask you to watch it without warning you first.)

Like many of TAC Victoria’s best PSAs, this particular spot was inspired by a winning idea submitted during their annual “ Make a Film, Make a Difference ” contest.  Using an interesting twist on the Wizard of Oz, this video reminds us that, if someone asks you to drive after you’ve been out drinking, they are not your friend . No matter how badly you want to get home, getting behind the wheel when you’re drunk is never the best way to get there.

Wearing your seat belt may seem like a mundane choice and one that’s yours alone to make, but this short spot reminds us how much this simple gesture can mean to the people who love us most. While many safe driving PSAs play on our fears of the horrible things that could happen to us personally, this video points out that when we drive safely, we do it for everyone else who wants to keep us from harm, too. Also check out the motorcycle safety PSA, “ Stay a Hero ,” another emotional appeal to family ties by Sussex Safer Roads , the same organization that created this one.

If you knew before you got behind the wheel that your speeding would kill someone, you wouldn’t speed. But as this PSA from the New Zealand Transport Agency points out, you never know when you’re making that one bad decision that’s going to result in consequences you’d do anything to avoid. Unfortunately, regret isn’t going to make a ticket go away, get you out of jail, or bring someone back to life. As drivers, the only thing we can do to prevent these consequences is to realize that, from the moment we make the choice to drive unsafely, it may already be too late to avoid a deadly outcome.

In the U.S., the recreational use of marijuana is currently legal in four states–with more on the way. And because all drugs make driving more dangerous, many people are justly concerned about what these laws will mean for road safety. To begin addressing these worries, the Department of Transportation in Colorado , one of the first states to approve the widespread use of marijuana, has introduced a PSA campaign to remind drivers not to get behind the wheel stoned. Like “Dumb Ways to Die,” this spot and the similarly themed “ TV ” make it easy to see that driving while high is simply not a bright idea.

Created by the sketch comedy group “The Warp Zone” in coordination with the NHTSA ‘s Don’t Text and Drive campaign, this PSA cleverly compares the act of driving to playing a video game. Though at first the spot seems to be suggesting that driving is all fun and games, nothing could be further from the truth. In fact, it’s the lighthearted and humorous tone that makes the sobering ending of this video so effective. (For a longer and more heart-wrenching take on the dangers of texting and driving, don’t miss “ From One Second to the Next ” by award-winning filmmaker Werner Herzog.)

More PSAs for You to Peruse

As these examples show, PSAs don’t have to be bland, dour admonitions against certain dangerous driving behaviors. In fact, these videos are often entertaining and engaging, produced by creative filmmakers inspired to do what they can to help reduce the number of drivers killed for reasons that are careless, reckless, or just plain dumb.

The PSAs we’ve presented here are just the tip of the iceberg. If you want to view more fantastic films focused on making the roads safer for everyone, please check out our Safe Driving PSAs playlist on the eDriving Youtube channel.