The factors contributing to these higher collision rates include lack of driving experience and inadequate driving skills; risk-taking behavior; poor driving judgment and decision-making; drinking and driving; and distractions from teenage passengers.

To address these problems, the NHTSA and the American Association of Motor Vehicle Administrators developed a licensing system that would prolong the learning process for young novice drivers and give them more time to learn the complex skills required to operate a vehicle.

The program consists of three stages identified by the type of license: learners permit, intermediate (provisional) license, and full drivers license. The three stages of the GDL system include specific components and restrictions to introduce driving privileges gradually to beginning drivers. Novice drivers are required to demonstrate responsible driving behavior during each stage of licensing before advancing to the next level.

Forty-six states and the District of Columbia currently have all three stages of GDL, though the particular state GDL systems vary. Consult your state's Drivers Handbook for details. This stage begins when the minor receives his or her learners permit after passing an eye exam and written test and lasts at least six months. An adult with a drivers license (who is at least 21 years old) is required to be in the vehicle at all times. During this stage, parents must certify that at least 30-50 hours of supervised driving have been completed. 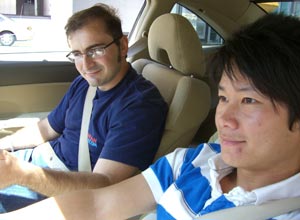 Examples of restrictions: unauthorized passengers; night-time driving; absolutely no alcohol while driving; all occupants must wear seat belts; use of portable electronic communication and entertainment devices is prohibited.

The driver must remain collision and conviction free for at least six months to advance to the next level.

This stage begins after the driver passes the behind-the-wheel driving test and lasts until the driver is at least 18 years old. It requires completion of a drivers education and training and imposes restrictions on driving (no night time driving, a limited number of teenage passengers in a car for a certain period of time, Zero Tolerance law, seat belt use by all car occupants, no use of portable electronic communication and entertainment devices, etc.). The driver must remain collision and conviction free for at least 12 consecutive months to advance to the next stage.

This drivers license is available after the driver successfully completes the first two stage. The driver is awarded full driving privileges