How to Minimize the Chances of Hitting Animals 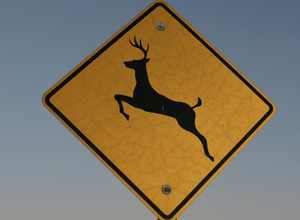 Take special care near deer-crossing warning signs. Be aware that deer adapt well to living close to humans and that some populated areas are as likely as rural areas to have deer around. The signs are there for a reason. Use your high-beams whenever possible. They will give you more time to spot and react to animals in the road. 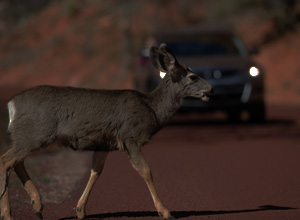 Keep your speed down at night. Most collisions do occur on narrow, two-lane rural highways, but they can occur on any type of road. If you see one animal, expect that there are others nearby. According to the Animal Protection Institute, 70% of deer-car collisions result after the driver slowed down for one deer and then accelerated, failing to see another. 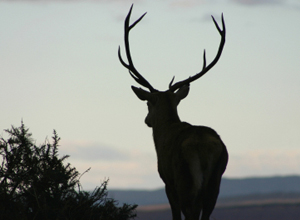 Know which seasons and times are worse than others. Deer are most active in the fall months of October, November, and December during the peak breeding season. Late February and early March are also critical months for deer-car collisions. Be especially watchful for animals in fair weather periods before storms. Deer are usually seen along the roadside during the early morning hours and late evening.

If you do see a deer or other animal in the road ahead, don't slam on the brakes. Keep your lane position, and sound your horn while braking in a controlled manner. Sudden panic stops are not a good idea, as they could spook the animal, causing it to suddenly dart into the path of another vehicle. Do not try to swerve around an animal! You could lose control of your vehicle and hit a tree or another vehicle—both potentially much worse than hitting a deer. If you swerve, there's also a chance that the animal will panic and run into your path.