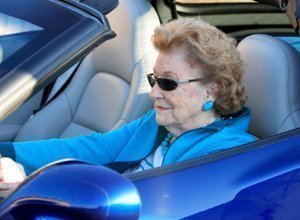 Older drivers can learn safer driving techniques for the long run in order to drive safely and confidently. Today’s 75-year-old driver who got a license at 16 would have taken their driving test in 1954! This means they learned about safety training on a road that was much less crowded than it is today.

In the 1950’s there were approximately 75 million licensed drivers in the US. Today there are more than 210 million. When the 75-year-old learned to drive, the rules and training were geared toward driving safely in a far less strenuous environment, with a third the drivers on the road in the 1950’s than are out there today.

Even though older drivers tend to take greater precautions while driving–they’re five times less likely to drive drunk than drivers under 65, they almost always wear their seat belts, and they don’t drive in dangerous conditions–5,500 people 65 and older died in motor vehicle crashes in 2009, according to the CDC .

Although older drivers do their best to drive safely, there’s still room for improvement, particularly  safety training and confidence building . Many older drivers tend to be overly cautious on the road, sometimes driving much slower than the speed limit, and making conditions more dangerous.

Drivers over the age of 70 can become safer drivers by training, according to a study by Matthew R. E. Romoser, an HF/E researcher. In his study, Romoser assessed how well drivers age 70-89 would retain safety training, specifically scanning the intersection and giving a secondary look to the sides of the road where other vehicles might appear.

The research, summarized in the  Human Factors  article, “ The Long-Term Effects of Active Training Strategies on Improving Older Drivers’ Scanning in Intersections: A Two Year Follow-up to Romoser and Fisher (2009) ,” found that two years after training the older drivers to scan the road conditions at intersections, the drivers continued good scanning practices an average of 73% of the time. The older drivers who didn’t get the training only scanned approximately 41% of the time.

Romoser’s study shows that older drivers can get a lot of value from training and that they retain the information learned in the long run. A quick way for adult drivers to improve safe driving habits, get up-to-date traffic rules and learn defensive driving techniques is by taking a simple and affordable course online . Drivers over 55 can benefit from courses specifically designed for them, in Colorado and California . In many states, taking the course actually mandates that insurance agencies give drivers a 20% discount on their fees, so the course often pays for itself many times over! Get safer, save money: hard to argue with that!