In order to be able to operate your vehicle safely, you must know the functions and locations of all the interior mechanisms of your car. The instrument panel contains gauges which include the following: Warning lights are provided on your car's instrument panel. They light up in case of a serious problem. There are three kinds of warning lights:

Temperature Warning Light/Gauge: this light goes on when the engine temperature or the radiator's coolant is too hot. In some vehicles, a gauge is used that would show the needle in the warning zone of HOT.

If this warning light comes on while driving, STOP as soon as you can at a safe place and shut the engine off.

Never remove the radiator cap to check the coolant level when the engine is hot. The coolant is at boiling temperature and under pressure. If the cap is released, the hot coolant will release with pressure and can cause severe burns if you are standing too close. 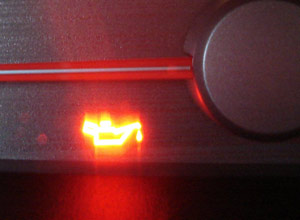 Battery Low Warning Light: when this light goes on or the battery gauge reads LOW, this means that the battery power is running out.