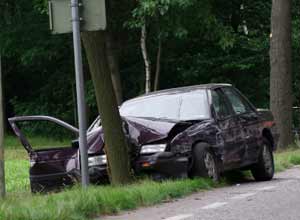 Force of impact is the force generated when objects meet. The faster you drive, the greater the impact or striking power of your vehicle. The laws of physics determine that the force of impact increases with the square of the increase in speed. So, if you double the speed of a car, you increase its force of impact four times. If you triple the speed, the impact is nine times as great. So striking something at these speeds is like driving off a one, four, and nine story building respectively. When two vehicles moving at the same rate of speed are involved in a collision, the vehicle that weighs less will take the greater impact; the larger and heavier the vehicle, the greater the energy and momentum. The smaller and lighter vehicle will have greater deceleration and may even be pushed in the reverse direction of travel. Unbelted persons in a collision cannot protect themselves against the force of impact. Without the seat belt restraint system, they will hit the car interior or anything in their way with a tremendous amount of force.