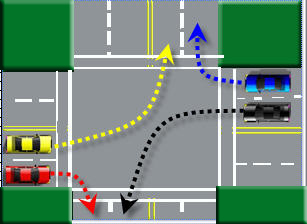 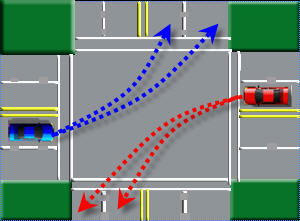 Some states are less strict and allow drivers to complete a left turn into either lane of the cross street, e.g., California, Missouri,Texas. Consult your state's Drivers handbook for details. 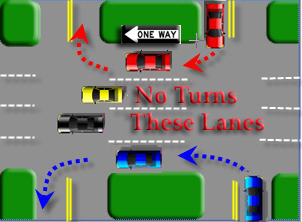 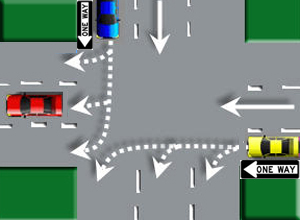 Here is an example of making turns in California and Texas. Notice that the driver may complete the turn in any lane open to traffic, if it is safe to do so as shown by arrows.

Right Turn against a Red Light: Signal and stop for a red traffic light before the stop line (or limit line), if there is one, or before entering the intersection. If there is no sign that prohibits a right turn on the red light, you may turn right. Be careful that you do not interfere with pedestrians, bicyclists, or vehicles moving on their green light. Note that a right turn on red light is prohibited by law in New York City.