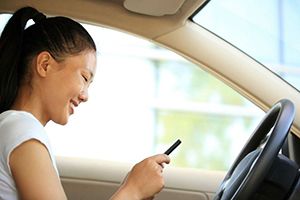 What You Need to Know about Teens and Distracted Driving

Teens are more likely to get into a traffic accident than any other age group, according to the Center for Disease Control (CDC). One of the leading causes of teen crashes is distracted driving. Texting likely comes to mind when you think of distracted driving, but there are other things that may be taking your teen's attention away from the road.

Continue reading to learn what you need to know about distracted teen drivers.

Their cell phone may not be the biggest distraction for your teen driver. Rather, it's likely his or her friends. Depending on the state you live in, there may be laws regarding how many passengers new drivers can carry. Regardless of whether or not a law is in place, you may want to consider implementing your own rules in this department.

According to a 2015 study by the AAA Foundation for Traffic Safety, 58 percent of crashes involving teen drivers were caused by distracted driving, with passenger interaction being the leading contributor. The study even went so far as to recommend that teen drivers be limited to one passenger, a family member, during their first six months behind the wheel.

Several studies have shown that a teen's chances of getting into a traffic accident increase with each additional teenage passenger in the car. Be sure to discuss these risks with your new driver.

Of course, cell phones also distract drivers of all ages, but it can be an especially dangerous occurrence for teens who don't have much experience behind the wheel.

According to the CDC, nearly 10 Americans are killed by texting-related crashes every day. Whether or not your state requires teen drivers to enroll in a driver's education course before they can get their license, you should make sure your child participates in a driver's education program that covered the dangers of using a cell phone in the driver's seat.

While texting and driving is illegal in most states, it's also important that you encourage your teen not to talk on the phone while behind the wheel either. According to the National Safety Council, using even a hands-free device to talk while driving can result in slower reaction times than a blood-alcohol level of .08.

Ask your teen to put their cell phone in their backpack or glove compartment to avoid distracted driving. There is also technology available that could help curb the problem. There are many apps that will turn on once a driver reaches a certain speed, and prevent them from using their phone while their car is in motion. The DriveMode app from AT&T has received especially high marks from users, but all major phone providers offer some version of the service.

Other things can also cause distracted driving … from fiddling with the radio to keeping an eye out for a street sign when you're driving to a new place. It's impossible to eliminate all distractions, but you should always strive to set an example for your teen. We've all seen people talking on the phone, eating or even applying makeup behind the wheel. Make sure your teen doesn't see you exhibiting these unsafe behaviors, or they may just adopt them.