Cars and Pedestrians: A Conflict Where Both Sides Lose 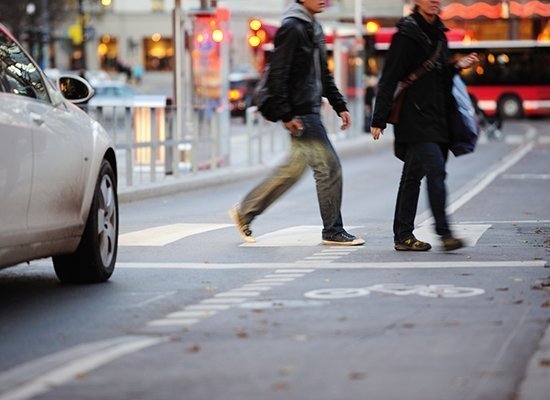 If we’re in a hurry, it can be easy to get frustrated with pedestrians who dawdle in the crosswalk or start crossing in the middle of the street without even looking first. When we’re on foot, however, suddenly it’s the people behind the wheel who seem aggressive, inconsiderate, or entitled–backing up without checking, stopping in the crosswalk, or creeping around the corner before we’ve had a chance to clear the intersection. But while the relationship between drivers and pedestrians can sometimes be contentious, there’s one thing that both groups can agree upon: crashes suck!

For pedestrians, the dangers that vehicles present are obvious: because pedestrians are infinitely more vulnerable to cars than cars are to pedestrians, the threat of getting hit carries serious consequences. Even at low speeds, a car that strikes a pedestrian is likely to cause injury, and this type of collision is particularly likely to be fatal. In fact, 4,735 pedestrians were killed in collisions in 2013 . Moreover, in the same year:

On the other hand, while drivers are rarely injured seriously in collisions with pedestrians, they have plenty of other reasons to avoid them. For one thing, if you end up hitting a pedestrian because you were in a rush, you’re going to end up running much later than if you’d driven more carefully. In addition, you’re going to have to deal with the cost of vehicle repairs, increased insurance rates, and potential legal consequences including fines, imprisonment, and the loss of your license. And of course, if you’re a decent person, you’re also certain to feel terrible about any injuries you caused because you weren’t a little more attentive to that person crossing the street.

With that in mind, we’ve put together this list of the situations where drivers are most likely to run into a pedestrian. By understanding why vehicle-pedestrian collisions occur , you can be better prepared to avoid an unwanted outcome–whether you’re on foot or behind the wheel.

How Crashes Between Cars and Pedestrians Happen

The first rule for dealing with pedestrians is one all drivers should be familiar with : you must yield the right-of-way to avoid a collision . Sure, some pedestrians break the law, crossing in the middle of the street or when a traffic signal tells them not to. Nevertheless, when we’re on the road, it’s not our job to teach lawbreakers a lesson; rather, our responsibility is to do all that we can to help everyone get where they’re going safely. Besides, pedestrians are often more ignorant about traffic laws than drivers are, so it’s common courtesy to be patient with them when they make mistakes.

The truth is that it’s not hard to predict when collisions between cars and pedestrians will occur. They typically happen when the driver can’t see the pedestrian or the pedestrian enters the roadway suddenly. By paying extra attention and being especially cautious in such situations, we can more effectively fulfill our duty to share the road safely.

A Driver’s Responsibility to Pedestrians

As a driver, your first priority must always be reducing the risk of injury and death–both to yourself and to others. When it comes to interacting with pedestrians, this means always being more attentive in areas where you may encounter them (such as intersections, parking lots, and school zones) and being prepared to yield even when you believe you have the right-of-way.

We’re all pedestrians sometimes, so whenever you drive, remember to treat walkers with the same consideration you expect when it’s you who’s on foot. No matter where you’re going or how you’re getting there, a courteous, attentive attitude is sure to make your trip that much easier!