How many things and assignments can you accomplish within one day? I am pretty sure it is not as many as you would like. Many believe that increasing the number of things to be done at the same time will positively affect productivity. Unfortunately, they are mistaken! Numerous studies have showed that  the brain cannot fully focus when multitasking . People take longer to complete tasks (often double the time), and the number of errors goes way up compared to performing tasks sequentially. Things get out of control when people try to multitask when driving a car or crossing streets.

Since the 1990s, experimental psychologists have performed experiments on the nature and limits of human multitasking. By now, it is scientifically proven that the  human brain can only perform one task at a time . Be especially careful when you’re behind the wheel. When you’re driving 55 mph, every second is 80 ft of distance that can easily passed unnoticed, if you’re doing other “urgent and important” things besides paying attention to the road. Often drivers don’t even think that they are jeopardizing everyone’s safety on the roads when they talk on the phone, eat, send emails, or polish their nails behind the wheel.

The National Geographic Channel made a documentary called “Test Your Brain” about the perception of human vision and multitasking. Watch the video below to see the proof that driving a car is the only thing you can do when you are steering the wheel.

Convinced? Or still think that the driver just wasn’t skilled enough to nail such simple tasks simultaneously? Well, you can test yourself with an online game, called  “Gauging Your Distraction” , created by New York Times to measure and evaluate people’s ability to text and drive.

Another interesting experiment from Dr.Hyman, a researcher at Western Washington University in Bellingham, studied pedestrians’ behavior to find out whether using a cellphone is a big distraction for people. The results are astonishing: only 25% of people talking on the phone noticed and remembered a clown in a yellow-and-purple costume cycling across a popular campus square.

NPR reports that multitasking in the car stays on the same level of danger as drunken driving. And driver inattention is involved in about 80 percent of collisions. And guess what is the most common distraction for drivers? That’s right, use of cell phone and electronic devices! 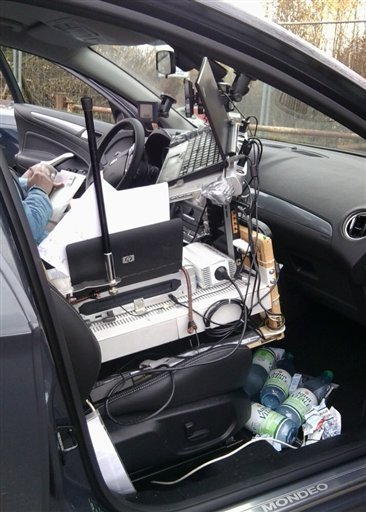 This picture above was taken by German police in November 2012. The 35-old driver had an entire mobile office in his car built on a wooden frame on his passenger seat. Police found a laptop on a docking station tilted for easy driver access, a printer, router, wireless internet stick, WLAN antenna, and an inverter to power it all. A navigation system and cellphone mounted to the windshield completed the array. But police weren’t able to find evidence that driver used it while driving, so he got away with just a speeding ticket.

This German driver was lucky enough not to be fined for using his devices. But what are the chances, that anyone else would? For example, driving while talking on the phone in a school zone in Texas can cost you hundreds of dollars and a countless number of other problems. Of course, later on you might get a chance to clear some of the bitter consequences of a ticket . But isn’t that easier to just avoid multitasking and prevent a mistake, than to correct it?

Doing several things at the same time turns out to be a counterproductive  and possibly dangerous affair with long-lasting consequences. Especially on the road, where every small distraction is a matter of life and death.