Development of the Automobile 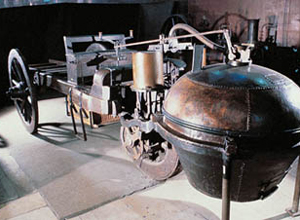 America is a nation on wheels and you're about to join the crowd. How did it all start?

French engineer Nicolas Joseph Cugnot built the first self-propelled vehicle in Paris in 1789: a heavy, three-wheeled, steam-powered carriage with a boiler that projected in the front. The Stanley brothers of Massachusetts (the most well-known American manufacturers of steam-driven autos) produced their Stanley Steamers from 1897 until after World War I. In 1903, Henry Ford incorporated the Ford Motor Company and proclaimed, "I will build a car for the great multitude." In October 1908, he did just that, offering the Model T for 950 dollars. Over nineteen years of production, the Model T's lowest price was 280 dollars. Nearly 15,500,000 Model Ts were sold in the United States alone. The Model T heralded the beginning of the Motor Age. The car evolved from luxury item for the well-to-do to essential transportation for the ordinary man. General Motors, Ford's main competitor, became the world's largest automobile manufacturer in the 1920s. U.S. leadership of the field continued until the 1970s, when American manufacturers were challenged by the growing sales of Japanese and German cars.